Welcome The hooplah that surrounds the release of a new Apple product is enough to make many otherwise calm and balanced adults froth and jigger. That some froth with excited happiness and others with outraged contempt is almost irrelevant, it is the intensity of the response that is so fascinating. For the angry frothers all are fair game for their fury – the newspapers, the blogosphere, the BBC and most certainly people like me for acting, in their eyes, as slavish Apple PR operatives. Why should these iPads and iPhones be front page news when, the frothers froth, there are plenty of other manufacturers out there making products that are as good, if not better, for less money? And isn’t there something creepy about Apple’s cultiness and the closed ecosystem of their apps and stores? The anti-Applers see pretension and folly everywhere and they want the world to know it. The enthusiastic frothers don’t really mind, they just want to get their hands on what they perceive as hugely desirable objects that make them happy. The two sides will never agree, the whole thing has become an ideological stand-off: the anti-Apple side has too much pride invested in their point of view to be able to unbend, while Apple lovers have too much money invested in their toys to back down. It is an absorbing phenomenon and one which seems to get hotter every week.

I almost always go out with an iPhone in one pocket, a BlackBerry in another and an Android device in a third. But then I am peculiar. If I had to keep only one, yes, I confess I would choose the iPhone, but I could cope happily if I were left with just a BlackBerry Bold or an HTC Desire. At least so I would have said until last week when Apple gave me an iPhone 4 to play with. For just as the frenzy of iPad launch has subsided (3 million sold in 8 weeks) it is now time for Apple haters to have a new device waved in their angry faces and time for Apple lovers to get verbally bitch-slapped for falling once more for Steve Jobs’s huckstering blandishments. iPhone 4 is here. It is only a year since many will have taken advantage of incentives to upgrade from iPhone 3G to iPhone 3GS and their deals may still be active, denying them the chance to leap to the newest phone without eye-watering financial penalties. Much as 3GS was released simultaneously with OS 3.0, so iPhone 4 arrives with iOS (as all Apple mobile device operating systems will now be designated) 4.0, which will be able to bring some, but not all of its new functions and features to older phones (but not the iPhone 2G). The phone will be available unlocked here in the United Kingdom, so your existing SIM (so long as it is cut down to the new mini-SIM shape) will work without having to jailbreak and unlock.

iPhone 4 is an object of rare beauty (even when badly photographed using an iPhone 3GS). Noticeably slimmer but a trifle heavier than predecessors, its new heft only adds to the profound feeling of quality and precision that the device exudes. Sharper edged, it is girt by a stainless steel band which cleverly houses all the antennas required by a modern smartphone. Jobs himself made a comparison between iPhone 4 and a classic Leica. With this device in my hand I feel that I am holding its designer Jonathan Ive’s personal prototype, hand-machined as a proof-of-concept model. Ive is surely one of the most influential and gifted designers Britain has ever produced and iPhone 4 may well be his masterpiece.

Apple have produced, and third parties will doubtless emulate and improve, rubberised wrap-around belts called Bumpers that easily slip round the edges of the handset affording what will probably be regarded as much needed protection. They come in all kinds of colours and give the device great resilience (I saw an Apple executive gleefully hurling his bumpered iPhone 4 across the room). Bumpers may diminish the perfect lines of the profile, but it’s a compromise many will make, as the sharp edges are bound to make one a little nervous about chipping and denting.

On the front of the phone can be discerned the lineaments of a forward-facing camera and inset in the glorious glass obverse (which leads one to speculate that future models might allow solar charging) an extra eye reveals that LED flash has finally arrived. All kinds of BlackBerry, HTC, Nokia and Sony will be snorting contempt as they recall that their own phones have had Xenon flashes for years, but this kind of flash at least is welcome to iPhone and works with typical intuitive simplicity with a simple Off/On/Auto setting available top left. The right hand icon swaps between front and back facing cameras.

That front facing phone suggests video calling of course. Apple have integrated a range of open standards for this, including H.264, AAC, SIP, STUN, TURN and ICE (don’t ask) into a package they call FaceTime (actually they bought a company of that name). It is not true video phoning as at the moment, 3G doesn’t support these data standards so you will only be using FaceTime where a WiFi connection is possible. Under those circumstances it is very impressive, offering excellent resolution, with both cameras on the iPhone being easily swappable so you can either show the party at the other end of the phone your face or others in the room: with a reasonable stand or easel for the phone Polycom style video conferencing at a fraction of the cost becomes a distinct possibility. The main back camera has been upgraded to 5 Megapixels, but Apple (and here they are quite right) have always claimed that their 3 MP original took better pictures than many 5 MP cameras on other phones, for the issue is not the sheer numbers of pixels, but more crucially pixel size (and lens quality of course). This new camera produces simply stunning images and might, for many, be reason enough to upgrade, especially when you factor in the iPhone 4’s remarkable new “Retina” display. Retina delivers the crispest images I have ever seen on a smartphone. The difference is most instantly detected with text – in emails, chats, texts and tweets for example. I still, after a week’s use, find myself staring at onscreen text with disbelief. 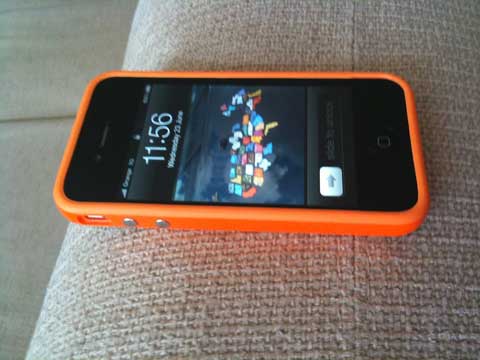 A bigger battery promises longer talk time, an inbuilt 3-axis gyroscope promises amazing new gaming features (check out Steve Jobs playing Jenga to get an idea), as well as fabulous refinements in the burgeoning field of augmented reality. The iPhone 4’s new 720p HD video footage can now be edited on the phone using the new mobile version of iMovie, which comes with transitions, themes and all the extras and refinements you would expect from Apple.

With the pep of the A4 chip, the Retina display, two cameras, a flash, HD video, a larger battery and that drool-worthy form factor, Apple has come up with its best ever handset. HTC Android handsets still impress and offer a viable alternative for many, but iPhone 4’s star quality is irresistible.

Those who can’t yet upgrade without financial penalty can still enjoy the advantages of iOS 4.0 – not all the features are available for iPhone 3G, but just about everything works perfectly on the 3GS. Multitasking is smooth and efficient (double press the home button for a line of open apps that can be accessed or closed). App Folders now allow you to bundle apps together according to whatever categorisation appeals to you. The Mail app gets an overhaul with better IMAP and Google Mail functionality. An element of spell checking is now available, though I still get “me” turning to “mr” all the damned time. Dozens of other little extras lurk in this major software overhaul and I can think of no reason why iPod Touch and iPhone 3G and 3GS users wouldn’t want to upgrade immediately.

On a less enthusiastic note Apple made an almighty arse of itself lately with some contemptible censorship in relation to iPhone versions of Joyce’s Ulysses and Wilde’s The Importance of Being Earnest, two of the greatest literary masterpieces in the English language. The decision was reversed with Apple representative Trudy Miller having the grace to admit:

“We made a mistake. When the art panel edits of the Ulysses Seen app and the graphic novel adaptation of Oscar Wilde’s Importance of Being Earnest app were brought to our attention, we offered the developers the opportunity to resubmit their original drawings and update their apps.”

The apology seems unreserved and I hope it marks a move away from an inhouse ethos at Apple that was beginning to make me feel distinctly queasy. Since he sold them Pixar Steve Jobs has been Disney’s major stockholder. I should hate to see the horror of a besuited and sanctimonious “family values” corporation take over at Cupertino. Shaved underarm overshowered American hygiene is sexless and unappealing at the best of times, when it is injected like so much processed cheese into the veins of a company that once prided itself on its alternative and open attitudes then it is time to weep. I do not want to feel, after all this time, like those horses in Animal Farm who look through the windows of the farmhouse only to see that the pigs are now wearing trousers.

Comments for this blog entry will be moderated.