I suppose the proudest thing I own is this badge, one of a very limited collection, given to me by the warm and wonderful Phill Jupitus. Anyone who can wear it can think of themselves of flying a flag of freedom, of having been awarded a medal struck for decency, fairness, honesty and what is right and morally good.

Sometimes, I must confess, I can get a little hurt when that shrieky weaselly little bourgeois tabloid is mean to me, which I believe is very often. I don’t read it of course: like anyone of education or sense or moral decency I wouldn’t have such a purulent creepy production in the house. Nonetheless, by the osmosis of twitter and well-intentioned cabbies I sometimes get to hear of some spiteful snide remark or other and naturally I can be upset.

Today’s headline and the leader inside however actually made me genuinely guffaw and wriggle with delight. It is the final proof, if proof were needed, that the Daily Mail is not just actually wicked (intentionally, knowingly lying) but actually now quite, quite mad. In the name (it must suppose) of morality, spirituality, goodness, kindness, sweetness and honesty it intentionally, knowingly twists, distorts, misrepresents, smears and calumniates. Will their editor and subeditors go to heaven? Is god pleased with them? Have they done a good deed? Is this their advertisement for the religious way? To lie?

I can always be certain that I have done a good thing when out of all the descriptions they can choose, their leader writers select “quizmaster”. “What has this country come to,” they want to know, “when an egregious, self-satisfied quizmaster presumes to make moral pronouncements on a two thousand year old institution etc etc.”

As it happens I have spent many many more hours of my life as a writer and a journalist than as a “quizmaster”, yet, oddly enough, we don’t read the Mail coming up with: “What has this country come to when a journalist presumes to make moral pronouncements on a two thousand year old etc.?” Perhaps the Mail leader writer would be kind enough to explain to the world what qualifications are needed to allow one to express an opinion, or write a letter to a newspaper? What profession should one belong to and can we have a list of those which in fact disbar us from expressing one’s views? 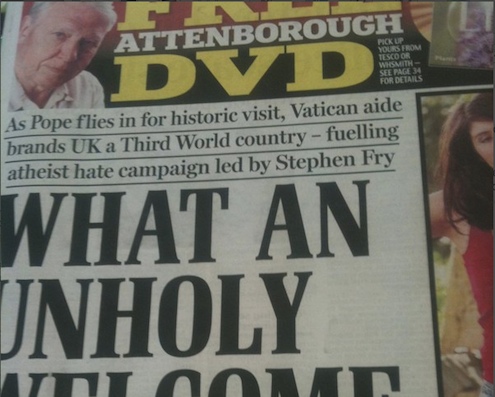 I was one of 50 signatories to a letter that called into question the official state nature of the papal visit. I didn’t write the letter, but am proud to stand behind it and with my fellow signatories. Otherwise my “hate campaign”, as they well know, begins with the words, “I’ve no objection to the Pope coming to visit Britain, he is welcome to do so…” it is, as I go on to say, none of my business. I go out of my way to make it clear that I fully respect the desire of the pious, the faithful and the devout to welcome their spiritual father, their supreme Pontiff.

My only objection is that this be a State Visit. It hasn’t happened before and the Vatican is in no real sense a nation state. Visit the place: it takes fifty minutes to walk round. You don’t need a passport or visa to enter. It is a curlicue of history that makes this “absolute monarchy” (to quote the Holy See’s own website) a “country”. Under no reasonable or worthwhile definition does the Vatican match up to the old-established and widely accepted Montevideo protocols on statehood. So by all means come, but please don’t ask the British taxpayer (a figure whom the Daily Mail is usually so zealous to protect) to help foot the bill.

Believe me, there is no hate there. None whatever. The Mail knows this perfectly well.

On an entirely separate matter, one can of course seriously, maturely and with dignity and respect debate one’s belief in God, one’s trust or respect for the institution of the catholic church and any number of issues. In a civilised, open and free country one hopes that there will be more and more debates of such a nature. I took part in one myself for Intelligence Squared with Christopher Hitchins, opposing a motion proposed by Anne Widdecombe that “the Roman Catholic church is a force for good in the world”. It was a debate conducted according to the parliamentary rules that govern these proceedings. I was proud to have taken part in such an evident proof of the open and democratic nature of Britain. I would have been even if we hadn’t “won” the debate that evening.

The most laughable element of the Mail’s weird outburst today is the way that the paper wants its readers, whoever the poor darlings may be, to see agnosticism, atheism, humanism and secularism as ‘fashionable’ and ‘established’ and therefore to figure themselves as maverick outsiders storming the ramparts of the liberal establishment.Yeah, right.

Actually, that’s not true, the most laughable element is their outrage at the idea we signatories are not being very hospitable to a visitor from overseas.

Let us think for a moment about the richness of that before we vomit with laughter. The Daily Mail if you please, wagging its finger about kindness to visitors from overseas and hospitality to foreigners in our midst.

Maybe funnier even than that is the happy circumstance that the daily giveaway on the front page today is a DVD by that proud atheist David Attenborough, who recently revealed the hate-mail and threats he has received over the years from those who do not believe in Darwinian science.

Because I have a theological turn of mind, the people I feel most sorry for, and always have, are those who work for the paper. I have never met a Mail journalist whose first words weren’t an apology. “We’re not all Paul Dacre types….” they mournfully beg us to believe. Well, leave before it’s too late! Just imagine that there really is a St Peter to greet you after death. Suppose he asks what you did with your life, your mind, your heart, your whole being and your immortal soul and that you have to reply you that wrote for the Daily Mail. Wow!

If I am “pompous”, “egregious and self-satisfied”, all failings of mine that especially upset the poor leader-writer, it is because I have the right to that Hated By The Daily Mail badge. More than a CBE or honorary degree it tells me, and forgive my lack of modesty, that I am decent, clean, kind, thoughtful and honourable.