Estonia Decided! You may think that my recent blog about the upcoming vote in Tallinn  was ‘outside intervention’ and ‘none of my business.’ I would prefer to believe that it really was no more than a free piece of writing sent into the world telling the story of how a modern country could  bring new hope – accepting, of course, all the faults that all countries have. I may have painted Estonia as some kind of Utopia. No democracy, no matter how hard it tries, can be that. After all, Utopia means ‘No-Place’.

Could Estonia prove itself to be progressive, wise, just and fair enough to help build a diverse society in which its straight and LGBT members could be treated with equal respect? I had no more resources than a keyboard and a blog outlet (and a fair number of twitter followers of course); but this was nothing compared with the extreme evangelical American right whose unholy alliance with Putinista/Othodox nationalism interfered on the ground in independent Estonia by means of direct interjections of money, flown in outsiders and the blackest of black black propaganda.

I should add that the not inconsiderable Russian minority in Estonia deserves respect and rights too, as of course to do all that country’s ethnic minorities. But, alongside the US Supreme Court’s recent rulings, it is has been good couple of days for LGBT Human Rights.

The Enlightenment of the 18th century brought us free-thought, the right to dissent, permission to enquire into the material universe without torture or excommunication, the ability to speak our minds and live our own lives and at last universal suffrage and the question of gender and sexuality parity: that its principles and ideals should be under threat not just from the lies and maniacal bigotries of the fundamentalists of the American right and their ‘family’ congresses but also from the Kremlin’s pact with nationalism and the Russian Church is bad enough. Meanwhile however, Turkey (and especially its Kurdish region) has lapping at its borders a boiling acid ocean of hatred not seen or imagined in our lifetime. The aims of ISIS/IS/ISL, of course, are more brutally extreme and relentlessly hate-filled than those of the World Family Congress or its European adherents and the Russo-Orthodox partnership. They have in common though a contempt for everything to do with the complexities, nuances and difficulties that so (contempibly to them) torture the liberal conscience.

It is just so plain easy to be a convinced extremist. Or even to be commitedly partisan in one political or social direction or another. Every day you know what to think about what: your scriptures, your church, your party have told you. It’s just so damned hard to to be liberal. A word that derives from the Latin for ‘free’ of course. We are not guided by revealed texts, not even by party manifestos. We don’t want to be hated, but we don’t want to hate either. We are first on the blacklists of every fundamentalist. Me more than most I suppose. Gay and a Jew and a busybody loudmouth liberal? What chance have I got when the Ottoman Empire Redux sweeps not just as far as Vienna as it did 300 or so years ago, but maybe this time even further?

The wonderful, wonderful news for the time being is that Estonia’s second reading of its bill allowing equal rights was passed this morning in Tallinn’s parliament. It shines like a good deed in a naughty world.

But what about the real fate of humanistic, fair-minded, balanced people? Those of us who take the word liberal to be a badge of pride, like honourable, or kind, or decent, and whose slogans are tolerance, diversity, understanding, fairness, mercy and justice? How are we going to survive the east wind that is coming? What weapons to do we have other than words? If the whole Western World with its satellites, 24/7 computer geniuses and intelligence experts never even saw ISIS coming, whom can we trust to do anything than make yet more catastrophic mistakes, hypocritical alliances and military blunders? 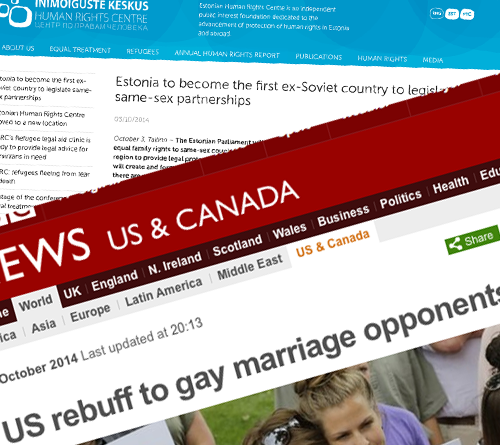 Still, on the whole a good day.

October 9, Tallinn – Estonia made history today when the country’s parliament passed the gender-neutral Civil Partnership Act on a close vote of 40 to 38. The new law acknowledges civil unions for all couples, regardless of the gender of the partners, and grants same-sex couples rights and responsibilities similar to a marriage between a heterosexual couple.

“The Civil Partnership Act is another step closer to a more tolerant and socially inclusive society. I am extremely thankful to my colleagues who supported the bill as real statesmen in spite of strong opposition, and who stood for democracy and human rights even under great pressure,” Imre Sooäär, the MP and the initiator of the Act said.

Peeter Rebane, a London-based film director and advocate for the Act is satisfied with the result: “It was a long fight for us to achieve something so basic and obvious. This act will guarantee the same-sex couples their fundamental rights that so-called traditional couples take for granted – a right to establish a family with the loved one, raise children, and enjoy financial benefits equal to married couples.”
“By passing this law, Estonia gave an example to all countries in this region who hopefully will follow us. I am extremely glad that we are drifting away from Soviet-minded homophobia and moving towards a free and tolerant society where all people are valued the same way and everyone has equal rights,” said Kari Käsper, Head of the Estonian Human Rights Centre, a human rights watchdog NGO.

The Civil Partnership Act will come into effect on January 1, 2016.

The Estonian Human Rights Centre is an independent human rights advocacy NGO dedicated to the advancement and protection of human rights in Estonia.

The Estonian LGBT Association is the official representative of LGBT citizens in Estonia. It focuses on informing the general public about LGBT people, sexual education, and advancing LGBT rights.

SEKY is a NGO that focuses on protecting the LGBT community’s rights in Estonia and representing their rights in court.